icon-search icon-search
Home Sexual culture Sexual assault and harassment How to step in when you see someone experiencing unwanted pressure or...
Share
Email
Print
Facebook
Twitter

Rate this article and enter to win

As community members, we all take steps to look out for the people around us. While these actions are occasionally big and dramatic, like calling an ambulance during a medical emergency, the vast majority of the time it’s small, everyday actions that make the difference. Our seemingly small actions—checking in on a friend who’s having a rough week, taking notes for a classmate who’s out sick, or giving directions to a lost first-year student—make our community strong, welcoming, and enjoyable.

Small, everyday actions are also the key to preventing sexual harassment and assault. When we see someone being pressured or experiencing unwanted attention, we have a variety of ways we can check in. These actions (sometimes called “bystander interventions”) are critical, but they don’t have to be complicated or dramatic. The best actions happen early on, and they are subtle and safe. The most successful ones might not even register as an “intervention” to anyone else. When we step in early, we can help build a community that doesn’t tolerate even casual disrespect, and we can prevent pressure from escalating to coercion and violence. Check out these three easy ways to help someone out when your instinct tells you something is “off.”

If you see someone who looks uncomfortable or notice a dynamic that makes you cringe, pay attention to that instinct.

Noticing these things early and disrupting those dynamics can stop a worrisome situation from escalating into something worse.

Remember, if you check in and realize that everyone’s OK, you can always extricate yourself. If everyone is enjoying the interaction, they will pick up right where they left off.

Stay safe and make sure your plan doesn’t put you or anyone else in harm’s way. Escalating the situation (whether verbally or physically) is almost always counterproductive and dangerous. Ideally, whatever strategy you choose would be subtle and nonconfrontational. If you step in successfully, it’s possible that no one else will notice.

“My friend and I were at a large graduation house party. There was an older man that started a conversation with my friend. From several glimpses across the room, [I could tell she was] uncomfortable. Her mannerisms showed that she was trying to be polite but wanting to leave. I approached her and she asked if I knew where the bathroom was. I showed her to the bathroom and asked her if she was OK. She told me that she was very uncomfortable around the man and that he wouldn’t leave her alone. We left right after, and later found out he was known for odd behaviors and bothering young women.”
—Second-year undergraduate, Arapahoe Community College, Littleton, Colorado

Often, pressured interactions involve only two people and can feel isolating. Just adding a third person to the mix can change things. By being a third wheel, you can dramatically change how the situation feels. You could try subtle interruptions, such as:

Give people an out

When someone is being pressured, they will often look for a way out of the situation. Make it easy for people to leave:

“I always use distraction. If I see something strange happening from afar, I will run up to the person and pretend I’ve just seen them for the first time in forever. From there they can easily leave with me.”
—Fifth-year undergraduate, Berea College, Kentucky

Figure out who is best positioned to act.

If you aren’t able to act in the moment, don’t assume the opportunity has passed. You can always check in afterward: “I saw you at the party on Saturday and was kind of concerned. Did that work out OK?”

This is especially effective if you are noticing an ongoing dynamic, such as a friend who seems totally consumed by a new relationship.

It’s never too late to take action. If your friend tells you about an experience of sexual violence or harassment, offer to connect them with a national sexual assault hotline (1-800-656-4673), a campus crisis center, or a Title IX coordinator.

If you’re worried that your friend might be the one pressuring others, step in. It can be helpful to use more stealthy tactics in the moment and have a frank conversation with your friend later. 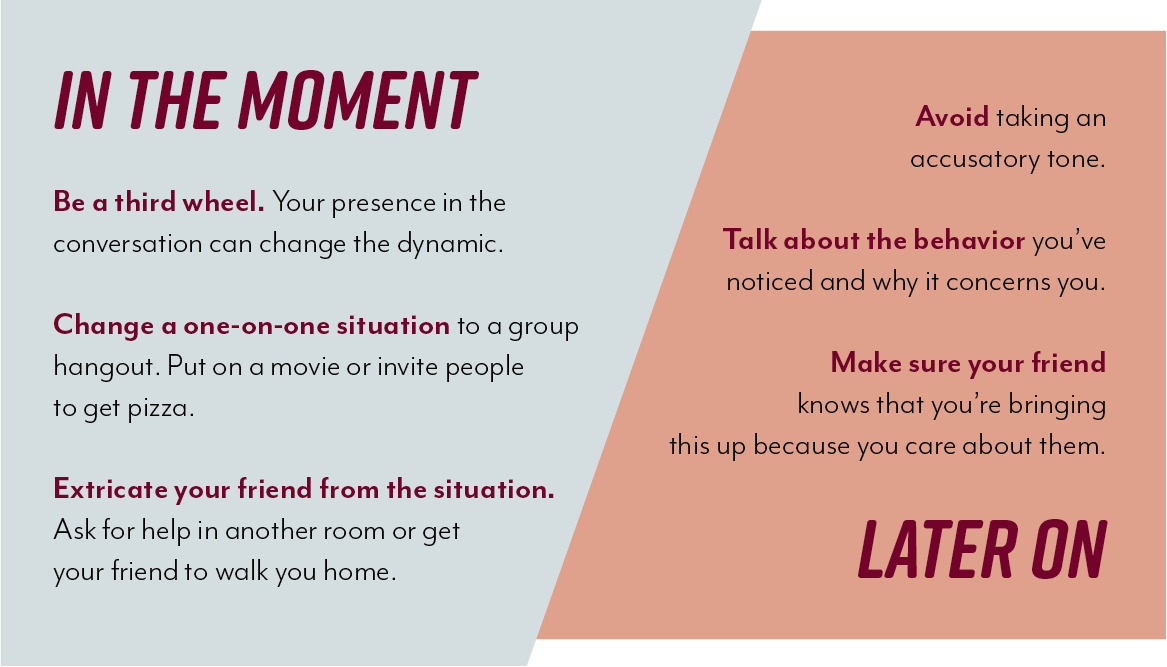 Certain patterns of behavior can make us feel uncomfortable or even trapped, whether it’s an aunt asking you what you’re going to do after graduation or a classmate trying to dance too close to you.

These kinds of pressured interactions can feel hard to disrupt when you’re caught up in them—but a third party can easily step in and help break them.

That’s why stepping in is so effective. It helps “break the script” by introducing a new character or dynamic. This can make it easier for the person who’s being pressured to leave the conversation or for the person applying pressure to realize that that’s what they’ve been doing.

You don’t need to be certain that a situation will end badly in order to do something—that is often very hard to gauge. Low-level pressure or disrespect is enough to warrant stepping in, because everyone deserves to feel respected in every encounter. Plus, if you take action and realize that no one is feeling uncomfortable or trapped, you can move on and they will pick up their conversation again.

GET HELP OR FIND OUT MORE

Support a male survivor: 1in6

Video of intervention examples: Who Are You? Campaign

Staub, E. (1971). Helping a person in distress: The influence of implicit and explicit “rules” of conduct on children and adults. Journal of Personality and Social Psychology, 17(2), 137–144.

What is the Title IX office and how can it help me?